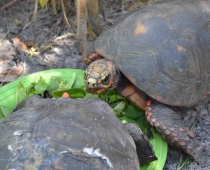 Hercules arrived in December 2006. He was found living on an elderly person’s property in Seminole County. She was concerned he wasn’t native so had a neighbor bring him in. He was likely a pet who escaped from his enclosure or he was simply released into the environment.

The Red foot tortoise (Chelonoidis carbonaria) are popular pet tortoises from northern South America. They are medium-sized tortoises that generally average 30 centimetres (12 in) as adults, but can reach over 40 cm (16 in). They have a dark-colored loaf-shaped carapace (back shell) with a lighter patch in the middle of each scute (scales on the shell), and dark limbs with brightly colored scales that range from pale yellow to dark red. There are recognized differences between red-footed tortoises from different regions. They are closely related to the yellow-footed tortoise (C. denticulata) from the Amazon Basin.

Their natural habitat ranges from savannah to forest-edges around the Amazon Basin. They are omnivorous with a diet based on a wide assortment of plants- mostly fruit when available, but also including grasses, flowers, fungi, carrion, and invertebrates. Eggs, hatchling, and young tortoises are food for many predators but the main threats for adults are jaguars and humans. Population density ranges from locally common to very scarce due in part to habitat destruction and over-collection for food and the pet trade.