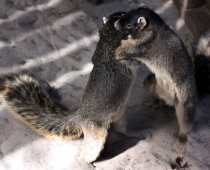 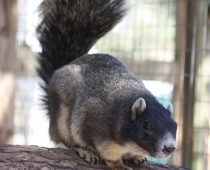 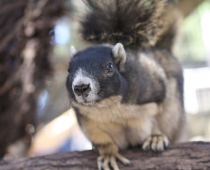 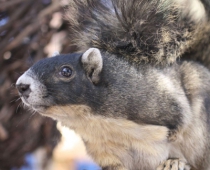 Nigel arrived to Back to Nature in April 2007, by Seminole County Animal Services. It was estimated that he was 1-2 years old. Nigel was found unconscious, after being electrocuted by a transformer in a Lake Mary neighborhood in Seminole County. Nigel was immediately delivered by the animal services officer, to our Veterinarian in Seminole County, Broadway Animal Hospital. The electricity entered his left front paw and exited his right rear leg. His front paw was so severely damaged by the electrocution, that it required surgery and amputation. Nigel was brought to BTN shortly after his amputation for further care. However, because he is missing a limb, Nigel was not a candidate return to the wild. He was deemed non-releasable by our vet of record and approved by FWC. Nigel and his Sherman’s fox squirrel friends are educational ambassadors who represent their rapidly declining FL native species.

*Nigel prefers to sleep in his nest alone but during the winter months enjoys the warm comfort of his buddy Roc.

Facts about The Sherman’s Fox Squirrel

Nigel is one of the three resident Fox Squirrel’s that lives at Back To Nature Wildlife Refuge. The Sherman’s fox squirrel (Sciurus Niger Shermani), is a FL native Species of Special Concern. The squirrel’s total body length measures 17.7 to 27.6 in, tail length is 7.9 to 13.0 in, and they range in weight from 1.0 -3 lbs with color variations ranging from buff to gray and sometimes black. Sherman’s Fox Squirrel is found in open piney woods of Central and Northern FL. Habitat Destruction is a great threat to these squirrels, resulting in a major decline in population. The diet of the fox squirrel varies seasonally, consisting primarily of pine seeds and acorns, but they also consume various nuts fruits, seeds, fungi, buds, insects and bird eggs. Acorns of Live Oak are a major component of their diet. The Fox squirrel spends most of the day on the ground foraging for their food. They can live 8-9 yrs in the wild, 10+ yrs in captivity.