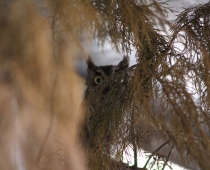 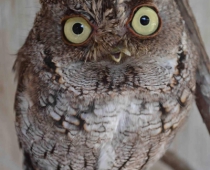 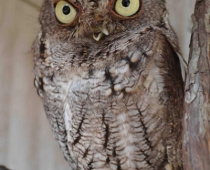 Wheems arrived on May 4, 2009. She was approximately a 1-month old nestling brought in by Orange County Animal Services. We suspect she had been kicked out of the nest due to her physical impairment. With her beak crossing over she is not able to tear into her food. As a result, her food needs cut into bite size pieces. Her name comes from the movie “Batteries not Included”.

Facts about The Eastern Screech Owl

Adults range from 16 to 25 cm (6.3–10 in) in length and weigh 121-244 grams (4.3-8.6 oz)] The wingspan can range from 46 to 61 cm (18 to 24 in). They have either rusty or dark gray intricately patterned plumage with streaking on the underparts. Mid-sized by screech-owl standards, these birds are stocky, short-tailed and broad-winged. They have a large round head with prominent ear tufts, yellow eyes and a yellowish bill. Rusty birds are more common in the southern parts of the range; pairings of the two color variants do occur. A pale gray variation also exists in western canada and the north-central United States. The color variations are referred to as “red morph” and “gray morph” by bird watchers and ornithologist.

Their breeding habitat is deciduous or mixed woods in eastern North America. Usually solitary, they nest in a tree cavity, either natural or excavated by a woodpecker; they will also use nesting boxes. The bird doesn’t actually build a nest; instead, females lay their eggs directly on the layer of fur and feathers left over from previous meals that lines the bottom of its den. Breeding pairs often return to the same nest year after year.They are strictly nocturnal, roosting during the day in cavities or next to tree trunks. They are quite common, and can often be found in residential areas. However, due to their small size and camouflage, they are much more frequently heard than actually seen. These owls are frequently heard calling at night, especially during their spring breeding season. Despite their name, this owl (nor most “screech-owls”) doesn’t truly screech. The Eastern Screech Owl’s call is an eerie tremolo with a descending, whinny-like quality, and also a monotone purring trill lasting 3–5 seconds.