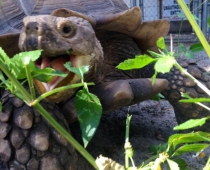 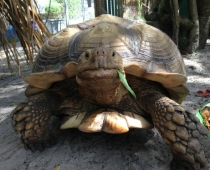 Athenos arrived in the Summer of 2006. He was adopted from Fallin’ Pines Critter Rescue in Christmas, Florida. When he was a surrendered pet he was estimated to be about 5 years old. Athenos was originally given the name Athena when he was first thought to be a female. Once he hit sexual maturity and was determined to be a male and the name was changed to Athenos.

Facts About The African Spurred Tortoise

The African spurred tortoise is native to the Sahara and the Sahel, a transitional ecoregion of semiarid grasslands, savannas, and thorn shrublands found in the countries of Burkina Faso, Chad, Eritrea, Ethiopia, Mali, Mauritania, Nigeria, Senegal, and Sudan. In these arid regions, the tortoise excavates burrows in the ground to get to areas with higher moisture levels, and spends the hottest part of the day in these burrows. This is known as aestivation . Burrows may average 30 inches in depth; some dig tunnel systems extending 10 feet or more underground. G. sulcata is the third-largest species of tortoise in the world after the Galapagos Tortoise, and Aldabra Giant Tortoise, and the largest of the mainland tortoises. Adults are usually 24 to 36 in long (60–90 cm) and can weigh 100-200 lb (45 – 91 kg). They grow from hatchling size (2–3 in) very quickly, reaching 6-10 in (15–25 cm) within the first few years of their lives. The lifespan of an African spurred tortoise is about 50–150 years, though they can live much longer.