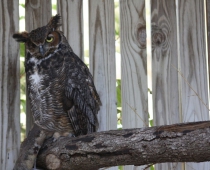 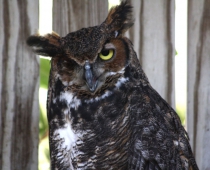 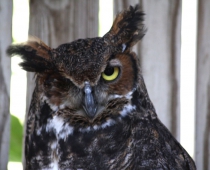 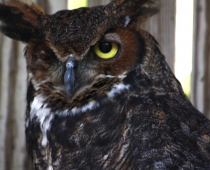 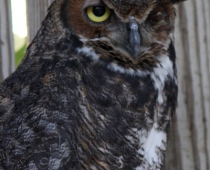 Columbo arrived on January 21, 1995. She came in as an adult from Village Animal Hospital in Palm Bay. She had sustained injury to her right eye and it was believed to have been the result of a gunshot, causing her eye had to be removed. Based on their sight to locate prey, Columbo would not have been able to survive on her own.

Facts about The Great Horned Owl

The Great Horned Owl is the heaviest extant owl in Central and South America and is the second heaviest owl in North America, after the closely related but very different looking Snowy Owl. It ranges in length from 17–25 in and has a wingspan of 36–60 in. Females are invariably somewhat larger than males. An average adult is around 22 in long with a 49 in wingspan and weighing about 3.1 lb.

There is considerable variation in plumage coloration but not in body shape. This is a heavily built, barrel-shaped species that has a large head and broad wings. Adults have large ear tufts and it is the only very large owl in its range to have them. The facial disc is reddish, brown or gray in color and there is a variable sized white patch on the throat. The iris is yellow, except in the amber-eyed South American Great Horned Owl. Its “horns” are neither ears nor horns, simply tufts of feathers.