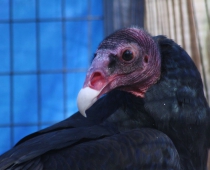 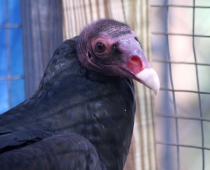 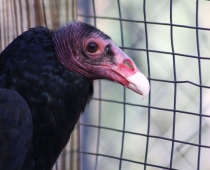 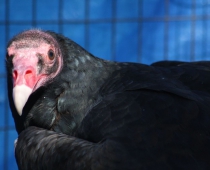 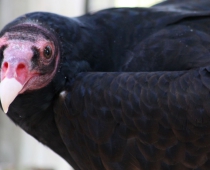 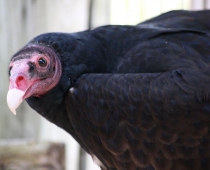 Cookie arrived on October 25, 1998. She had sustained injury to her left wing after being hit by a car. She had broken her wing and it fused in an improper position making her incapable of flight.

Facts about The Turkey Vulture

The Turkey Vulture (Cathartes aura), also known in some North American regions as the turkey buzzard, is the most widespread of the New World vultures. One of three species in the genus Cathartes, in the family Cathartidae, the Turkey Vulture ranges from southern Canada to the southernmost tip of South America. It inhabits a variety of open and semi-open areas, including subtropical forests, shrublands, pastures, and deserts.

The Turkey Vulture is a scavenger and feeds almost exclusively on carrion. It finds its food using its keen eyes and sense of smell. It roosts in large community groups. Lacking a syrinx—the vocal organ of birds—its only vocalizations are grunts or low hisses. It nests in caves, hollow trees, or thickets and each year it generally raises two chicks. It has very few natural predators. In the United States, the vulture receives legal protection under the Migratory Bird Treaty Act of 1918.