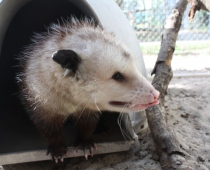 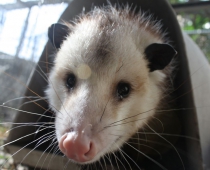 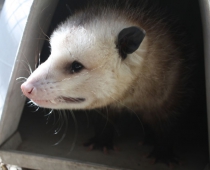 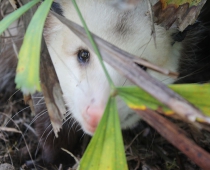 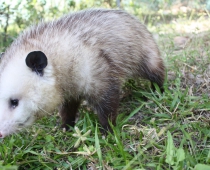 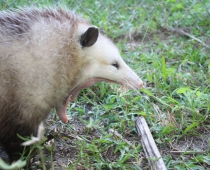 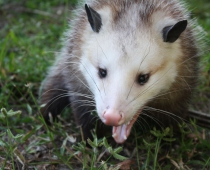 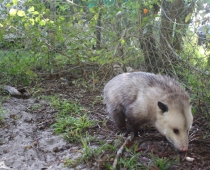 Facts about the Virginia Opossum

The Virginia opossum (Didelphis virginiana), commonly known as the North American opossum, is the only marsupial found in North America, north of Mexico. In the United States it is typically referred to simply as a possum. A solitary and nocturnal about the size of a domestic cat, and thus the largest opossum, it is a successful opportunist. It is familiar to many North Americans as it is often seen near towns, rummaging through garbage cans, or lying by the road, a victim of traffic. The Virginia opossum was not originally native to the Western United States. It was intentionally introduced into the West during the Great Depression probably as a source of food, and now occupies much of the Pacific coast. Its range has been expanding steadily northward into Canada.Opossums have long, hairless, prehensile tails, which can be used to grab branches and carry small objects. They also have hairless ears and a long, flat nose. Opossums have 50 teeth, the most out of any North American mammal, and opposable, clawless thumbs on their rear limbs.Opossums have thirteen nipples, arranged in a circle of twelve with one in the middle of their pouch. The Virginia opossum is noted for reacting to threats by feigning death. This is the genesis of the term “playing possum”, which means pretending to be dead or injured with intent to deceive. In the case of the opossum, the reaction seems to be involuntary, and to be triggered by extreme fear. It should not be taken as an indication of docility, for under serious threat, an opossum will respond ferociously, hissing, screeching, and showing its teeth. But with enough stimulation, the opossum will enter a near coma, which can last up to four hours. It lies on its side, mouth and eyes open, tongue hanging out, emitting a green fluid from its anus whose putrid odor repels predators. Besides discouraging animals that eat live prey, playing possum also convinces some large animals that the opossum is no threat to their young. Opossums are omnivorous and eat a wide range of plants and animals such as fruits, insects, snakes, and other small animals. The Virginia opossum has been found to be very resistant to snake venom. Persimmons are one of the opossum’s favorite foods during the autumn. Opossums in captivity are known to engage in cannibalism, though this is probably uncommon in the wild. Placing an injured opossum in a confined space with its healthy counterparts is inadvisable. Opossums, like most marsupials, have unusually short life spans for their size and metabolic rate. The Virginia opossum has a maximal life span in the wild of only about two years.Even in captivity, opossums live only about four years.The rapid senescence of opossums is thought to reflect the fact that they have few defenses against predators; given that they would have little prospect of living very long regardless, Like raccoons, opossums can be found in urban environments, where they eat pet food, rotten fruit, and human garbage. Though sometimes mistakenly considered to be rats, opossums are not closely related to rodents. They rarely transmit diseases to humans, and are surprisingly resistant to rabies, mainly because they have lower body temperatures than most placental mammals. In addition, opossums limit the spread of Lyme Disease as they successfully kill off most disease-carrying ticks that feed on them.