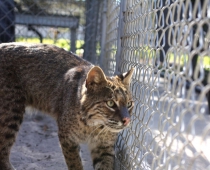 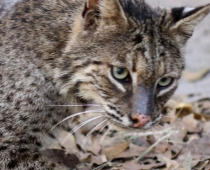 Jagger arrived on January 23, 2009 at approximately 8 months old. He was found limping and malnourished on the side of the road by Seminole County Animal Services. It was thought that he was hit by a car. He was taken to Broadway Animal Hospital for evaluations. X-rays showed no damage, however, he had a definite limp. It was noticed that his back left leg was 2 inches shorter than his right. This may have been the result of an injury as a kitten.

Facts about Jaggar the Bobcat

Though the bobcat prefers rabbits and hares, it will hunt anything from insects, chickens, and small rodents to deer. Prey selection depends on location and habitat, season, and abundance. Like most cats, the bobcat is territorial and largely solitary, although with some overlap in home ranges. It uses several methods to mark its territorial boundaries but commonly uses claw marks. The bobcat breeds from winter into spring and has a gestation period of about two months.

Although bobcats have been hunted extensively by humans, both for sport and fur, their population has proven resilient. The bobcat resembles other species of the Lynx genus, but is on average the smallest of the four. Its coat is variable, though generally tan to grayish-brown, with black streaks on the body and dark bars on the forelegs and tail. Its spotted patterning acts as camouflage. The ears are black-tipped and pointed, with short, black tufts. There is generally an off-white color on the lips, chin, and underparts. Bobcats in the desert regions of the southwest have the lightest-colored coats, while those in the northern, forested regions are darkest.